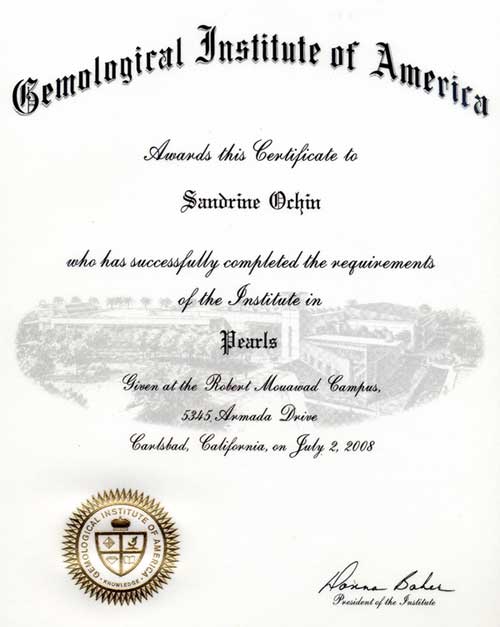 Tahitian pearls are cultured pearls produced by following the Mise-Nishikawa technique. This consists of introducing a small marble-shaped nacre and a piece of tissue from a donator mother-of-pearl into the gonads of a Pinctada margaritifera shell.

This piece of tissue, called a graft, serves to carry the mother-of-pearl-producing cells into the gonads, which do not contain this type of cell.

The graft will affix itself, create the pearl sack, and then surround the nucleus with mother-of-pearl.

This technique has the advantage, in spite of the heavy mortality rate, of keeping the nucleus in the nacre until the harvest.

In its natural state, these nacres pass their lives attached by their byssus to a solid support (coral, rock, etc.), with its opening toward the surface of the water. In a pearl farm, the nacres are raised attached to ropes and are suspended with their openings toward the bottom. If the nucleus was simply placed into the interior of the nacre, it would quickly fall out.

That is why, even though it is now prohibited in French Polynesia, for many years the nucleus were soaked in antibiotics, to avoid infection and to aid healing after the graft. 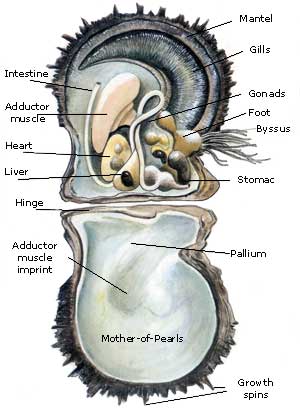 This is how the grafting takes place:

- First of all, it requires a stock of nacres. This is obtained by the collection of spats. The spat is the larval state of the oyster, and drifts through the water. Collecting lines, generally about 200 yards long, on which fibrous plastic collectors are attached, are placed in the lagoons. The larvae will attach themselves to the collectors, and live their first several months there. During that period the larvae grow from a microscopic size to about 2 inches in diameter. They must then be detached because they have become too big to develop normally on a collector where sometimes over 200 shells are crowded together. Once they are detached they will be placed on cords with between 20 and 200 other nacres, depending on the technique and the size of the oysters.

- This stage is very important, because the quantity of available nacres will influence the next steps of pearl production. Certain periods have fewer spats and certain pearl farms must slow down their production. Also, collecting spats is not possible on certain atolls, (Rangiroa for instance), and pearl raising had more difficulty developing because the transport of nacres from other atolls (Ahe, Manihi, Takaroa) was necessary. In fact, some farms have become specialized in the production of young nacres which they sell to other farms.

- At 18 months of age, the oysters obtain the size necessary for grafting, that is about 3 or 4 inches in diameter.

- Between the elimination of nacres that the grafter judges are not good quality, and those that will be used to form the graft, we can estimate the number of nacres which are finally grafted to be about 90,000.

- After the grafting, about 40% of the oysters will die or reject their nucleus. To avoid unnecessary handling and especially to verify the grafter's work, the newly grafted nacres are placed into individual pouches for several days, where any rejected nuclei can be recovered.

- Then the nacres will be placed on cords of at least 200 yards long, containing 10 to 20 nacres, and submerged at a depth of about 2 feet.

This depth permits the increase in colored pearls, and also enables their protection from predators, (trigger fish, eagle rays,…) In spite of this, a large number of nacres will be eaten.

- They'll stay in the water for 12 to 18 months, during which time they'll be taken out at least twice to be cleaned. In their natural state they would live on the bottom of the lagoon, attached to a coral rock, cleaned by small fish which don't exist so close to the surface where the grafted nacres have been placed.

- The pearl farmers hope to harvest 45,000 marketable pearls, of which only 2% will be round grade A pearls.

- These pearls will have a diameter of between 8 and 10 mm (1/3 to½ inch) because a nucleus of 6mm has been inserted into the oyster, compatible with its size.

- Many small defects in the pearls are due to difficulties in obtaining high quality nuclei, even though their price is quite high (up to 2,200 Euros per pound for the largest nuclei).

- The nacres which have produced the most beautiful pearls, nice and round and without noticeable defects, will be grafted again (“over-grafted”), probably around 30,000 nacres.

- Once again, the oysters which are still in good health will undergo a third grafting which will produce less than 7,000 saleable pearls of between 13 and 16 mm.

- The older the oyster and the more often it has been grafted, the less it's possible to obtain a good quality pearl. The largest pearls are often grayish and dull. This explains why the largest round A-quality pearls are so rare, and therefore more expensive.

Also, we must consider that the 100,000 nacres used from the beginning is the yearly maximum possible for the largest family-run pearl farms, although there are huge farms which graft over a million oysters each year.

I hope that these explanations have helped you to understand the profession of pearl farming as well as the black pearls themselves which have been so steeped in mystery.